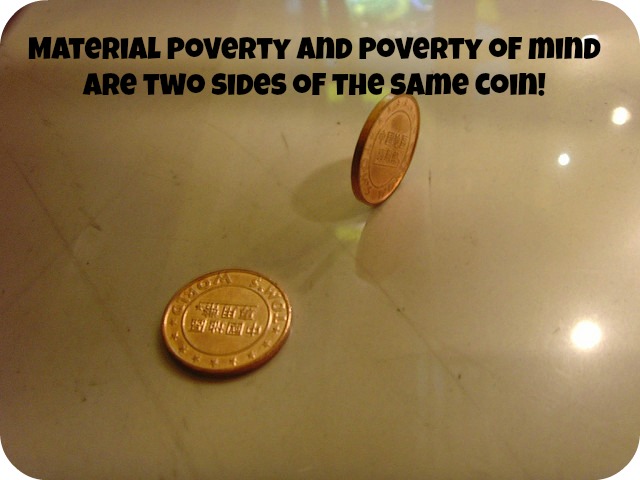 “That in this land of abounding wealth, during a time of prosperity, probably more than a quarter of the population are living in poverty, and so is a fact that may well cause great searching’s of the heart.” – Benjamin Rowntree (1901).

Poverty is a state of mind as much as it is a reflection of your current bank balance. There’s a great difference between feeling rich and feeling poor. One may exist in having the riches of security, love and enthusiasm through their family and their work, whilst someone living on a similar breadline may be feeling disheartened and frustrated.

Sufficed to say money does help alleviate pressures and prevent problems occurring or reoccurring. For example, a wealthy or secure person is less likely to become alcoholic as they are able to surround themselves with possessions, intrigue and entertainment. A poorer person, or at least one who feels poorer, may turn to particular vices or addictions in order to drown out the noise of perceived failure.

It’s also true of today that so much fashionable information and technology is available that I’d be surprised if anyone can honestly say they understand it all. Prices for fancy possessions level out to become affordable but the availability of them widely increases, and so the pressure remains for people of all ages to manage these distractions in their life (including the likes of game consoles and popular mobile phone applications).

To digress: We live in peculiar times whereby someone like myself can own an item such as an expensive computer tablet and have a decent roof over their head but still be engulfed by the sensation of poverty and the perils of losing out big time when it comes to finding that inner contentment.

Socialising has become semi-reliant on typing one’s thoughts rather than speaking them, and as a way of accumulated habit people are leaving marriage and children a lot later than before. We ourselves are the ones that have changed, and so now people tend to pursue themselves well beyond the teenage years. You could argue that parents spoil their children but I blame marketing and advertising.

It is the key life choices, such as marriage, that I refer to when it comes to the modern perceptions of poverty. Having your own offspring isn’t just down to some immense physical attraction to your spouse, and it certainly isn’t simply something recreational to pass the time. It is a chosen venture that gives you the purest riches available on this Earth; the love of your children. And whilst joy can be found through things like hobbies and travelling, I believe love is the only way a person can feel truly wealthy.

To make comparison, and please do forgive my relative ignorance, things were much different around a hundred years ago. In the early 1900’s low wages, masses of unemployment and high debts along with severe inequality and poor health were the cards that were dealt to our grandparents. Now healthcare is more readily available and thankfully inequality will never be as bad as it was, but perhaps we have diluted our appreciation for the finer things in life.

You could say that back in the days of our grandparents you simply had to pursue a common career or line of work, when now a lot of these jobs are obsolete. You also had to meet someone and marry them in timely fashion to prevent yourself becoming intensely lonely and struggle to keep active. Those days we needed each other more to keep warm in winter, high in spirits and stay close together in order to provide and to support.

In the troubled years of the beginning of the 20th century disease was writhe and houses in northern Britain contained as many as ten children, often all living in a single room. This is indeed true poverty, and that forced people to keep together – to survive as a family unit and make what happiness they could from their often desperate state of living.

Nowadays, although the importance of the traditional family unit has not completely faded away, there is less stress on the construct of the family and genuine appreciation for one another’s time and effort. It has become a case that happiness is an expectancy, and the projection of wealth is more than just a class issue, it is a beacon of one’s personality and how they’re able to influence the world around them.

So it is with these changes of lifestyle projections that we look for different things in each other, in effect causing us to look deeper and become more selective over what we see in future partners and how home life will unfold. In a similar way, we are now more attentive as to how deep we look within ourselves for success.

The fear of poverty, monetary or emotionally, is making us choose much more carefully when it comes to the desired journey in life. How we behave and how we operate is descended by the mistakes made by generations gone by. Popular morality changes and the fashionable ways of living change so we can continue to pursue a life without feeling poor. And if I’m honest it all frightens me half to death.

2 thoughts on “Poverty of Mind and Money: Security Through Family”