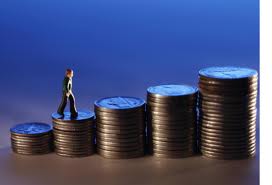 Those amongst my readers who either ‘know me’ from elsewhere in the virtual world or are very perceptive (or both) have already noticed that I hardly ever – in fact, it is fair to say that I never – talk about ‘debt’. Except to strike it and substitute it for ‘negative wealth’. It is time to clarify why I talk about ‘negative wealth’ rather than about ‘debt’. I have come up with four main reasons for that. Here they are.

Do you remember the formula used to calculate one’s net wealth? Just to make sure that we are thinking and talking about the same thing here it is:

(Btw, a friend very nifty with spreadsheets helped develop the Money Principle Net Wealth Calculator which can be found on this blog and is adapted for the UK, and possibly the rest of Europe)

Well then, debt is the negative part of your net wealth; hence referring to it as ‘negative wealth’ is technically correct. Putting it like this also has the advantage of drawing attention to the fact that increasing your positive wealth or reducing your negative wealth achieves the same result – your net wealth goes up. And it feels so good!

Last Wednesday I published a post discussing the difference between ‘poor’, ‘rich’, ‘broke’ and ‘wealthy’. One logical conclusion was that since the difference between being ‘poor’/’rich’ and being ‘broke’/’wealthy’ is of mentality, developing a positive mentality is the way forward. Don’t know about you, but for me ‘debt’ was always linked to images of negative mentality. The first book that kept me up all night was the Little Dorrit – I will leave it to you to conjure the images that go through my head. Thinking of negative wealth instead has no negative imagery associated with it. Debt is scary and paralysing, negative wealth is liberating and prompts to action.

I always associate ‘debt’ with loss. So every time the payment goes out of my account I feel the pain; every time I make an overpayment instead of feeling proud I feel ashamed. When I think about debt I see myself in a position subservient to the bank; and I don’t like it. The reason I don’t like it is because it makes me vulnerable and feeling that whatever I do, I am spending someone else’s money. Not true – debt is the least risky way in which banks make money; debt is their business. In fact, the interest on my debt keeps one low grade employee in a job.

Do you believe in the law of attraction? That we attract what we think about? Well, I do. The more I thought and worried about ‘debt’ the more ‘debt’ we got. Once I started thinking about negative wealth we started getting wealth. Funny, I know; and I am fundamentally a rationalist so there is space for cognitive dissonance here. But this is how it works.

These are the four main reasons why I talk about ‘negative wealth’; and our wealth has been steadily increasing. Can’t wait till the day the negative wealth is all gone! And sorry if someone junior loses their job – I hope this won’t happen. But imagine if we all eliminate our negative wealth? What are the banks going to do?