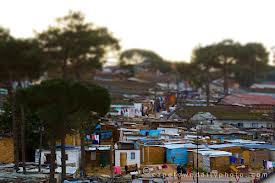 There was a time, over fifteen years ago, when I did believe that one can have a really good quality of life in a poor country; given that one isn’t poor, of course. This belief had no foundation in experience – only in casually empiricist observation. I had noticed that some of the richest people in the world were from and/or lived in rather poor countries.

Then I came to South Africa for the first time in the mid-1990s – experience and observation changed my beliefs about the possibility to have good quality of life in a generally poor country. Now that I am here again, I am reminded of the extent to which poverty diminishes one’s quality of life even when they have the resources. And we are speaking of poverty on a scale that is rather overwhelming – the state is poor and the overwhelming proportion of the population is poor. Did you know that according to OECD data (2005):

At the same time, South Africa is the top exporter of diamonds and gold in the world; it is a lush, fertile country where fruit is abundant and vegetables delicious. Problem is that the economy is still predominantly primary – the diamonds and gold are dug out here but the expensive jewellery is made in the Netherlands (amongst other places). Inequality is probably the biggest problem in South Africa – in regional development, educational levels and income.

How does this affect day-to-day life?

South Africa is one of the least safe places on this Earth; probably on a par with Mexico – though the way in which the two countries are not safe is very different.

We just need to remember that the guy who invented fire blowing car tires is South African and he introduced this invention to deal with a specific problem – hijacking cars at traffic lights. When I was here in the mid-1990s my I was not allowed to step out of my hotel on my own at all – in fact, on my way back I was escorted to the Airport where the driver’s instructions were to see me through passport control and leave only after that.

I thought things may have changed – well, not really. I am stuck in the hotel (the course I am teaching is at the same hotel) and I was told that I could have a walk around if I manage to get together a group of five-six people. But anything less than that is not really safe – and I am not staying in a township but in one of better parts of Pretoria.

We are not talking advanced competencies here; in fact, most of the people I meet are as versed with technology as, if not more than, me. Where this lack of skills shows is in the little things – it shows in the level of maintenance and in the small things that don’t work.

This is particularly obvious in matters of finance. Today I went to a nearby shopping centre to buy earphones for my iPhone – yep, this is what I forgot and having to run for hours on a treadmill is not a joking matter; one can watch people swim badly for so long and after that needs to listen to music.

One of the first things I noticed in the Apple shop was a large notice saying that customers need to show a picture ID when paying with a credit card; which is to be expected when there is high crime rate. Thank goodness I had cash – carrying my passport with me is probably one of the last things I’ll consider doing given the high probability of getting mugged.

You just don’t know where you stand in services

What you do when you are booking a hotel (or checking a booking that has been done for you)? You go on the hotel website to check what is on offer right?

This is exactly what I did; and although the hotel was booked for me by the South African organisers of the event I was very pleased to see that it boasts a gym and a swimming pool. ‘Good!’ – I thought – ‘I am in training so I could run in the gym and swim; this may turn out to be really great.’

When I arrived, it turned out that the swimming pool is actually a paddling pool (and nobody paddles in it either) and that there is no gym at the hotel. Next I was told that the gym is 5 minutes away and hotel guests can use it.

In the end, I managed to clarify that the gym is Virgin Active; it is 15 minutes drive away and I have to pay to exercise there.

I was thinking that there may be a case of misleading advertising there. As luck may have it, last night I went to the gym with a young woman who looks after the website and the IT systems of the hotel chain. She promised to change the information so the ones arriving after me are psychologically prepared.

No, one can’t have a good quality of life in a poor country even when they have the resources. And the problems are not simply poverty itself but all the social problems that accompany it. Somehow the cycle of deprivation, lack of education and skills, crime and further poverty (all this going on for generations) ought to be broken.

There is so much potential here but realising it will take a long time.

23 thoughts on “Could one have good quality of life in a poor country?”