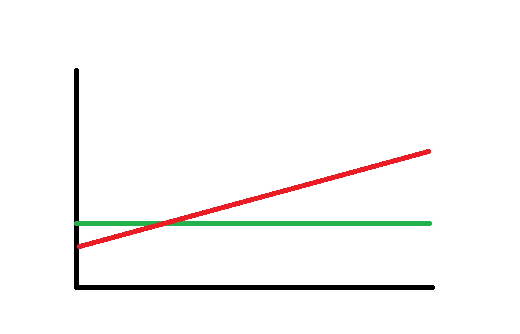 There are two things in finance, including personal finance, with which you can work if you want to change your situation: income and expenses. Your financial situation and future crucially depend on what the ratio between the two is and what have you done with the difference; if the difference is positive that is.

We can make personal finance as complex and complicated as we wish; and at some level of micro-finance it is complex – personal finance is at the crossroads of finance, simple arithmetic, broad education, analytical skills and emotion. However, the core of it is also scary in its simplicity: it is all about the difference between what you spend and what you earn.

I have been thinking  that depending on this difference our personal finances roughly fit under three profiles. I call those ‘Debt Profile’, ‘Survival Profile’ and ‘Prosperity Profile’. This is what they look like. ( The green line is ‘income’ and the red is ‘spending’)

Correct me if I am wrong, but I believe the ultimate aim of each of us is to move away from the ‘Debt Profile’; naturally, the ultimate aim of personal finance – be it blogs, books or direct finance advice – is to offer support with knowledge, ideas and tips for this to occur.

As is obvious from the graphs, there are two ‘pure’ ways to move away from the ‘Debt Profile’ – by cutting expenses and by increasing income. Many in personal finance would argue, and indeed have done so, that cutting expenses is easier than increasing income. In fact, a whole branch of personal finance blogging – the frugality blogs – exists based on this assumption. Judging by the popularity of frugality blogs, cutting expenses, in many cases in fairly extreme ways, seems a popular way to go with people generally.

Bloggers, such as Jacob at Early Retirement Extreme (ERE) – a blog that set out the philosophy behind achieving financial independence fast and retiring early – have argued that cutting expenses is easier, more efficient and has higher utility because of the following:

Mathematically and logically this makes perfect sense. Achieving financial independence fast and early is also emotionally very attractive; after all, who want to be stuck in a cubicle for forty years.

I am not going to argue whether or not cutting expenses is easier than increasing income: I firmly believe this is very different from person to person. For some, it would be easier to cut expenses; others, myself included, find it easier to increase their income.

How easy, or difficult, it is to cut expenses would depend also on your starting point: if you are already on the ‘bread line’ cutting further may be problematic. Similarly, the ease with which one can increase their income would depend on the general economic situation, personal circumstances (like level of education, skills and competences) and personal characteristics (how entrepreneurial one is).

And this is my problem with moving away from the ‘Debt Profile’ simply and only by cutting expenses. Problem or not, even I won’t deny that in the personal finance ‘game’ controlling expenses is necessary.

However, the pre-eminence of cutting expenses or increasing income is not absolute: implementing one or the other, depends on timing, severity, personal objectives and ambitions. (I am omitting the economy for reasons of simplicity, but the health of the economy is what frames possibilities.)

Time and timing play a great role in personal finance. It is not only that your emphasis is likely to change, and indeed it does change, depending on the state of your finances but it is also important how long it takes for changes to have effect.

This is particularly important if you find yourself in debt. In that case, you need to ‘stabilise’ your finances really fast, meaning you have to make sure to stop getting further in debt by changing the ratio between spending and income.

We managed to cut our monthly spending by about £2,000 ($3,200) in matter of weeks when we were in debt. Hard? Not really; we just stopped paying for things we no longer used, stopped over-paying for different kinds of insurance and rationalised our day to day spending. Then again, as we recognise now, we were really wasteful! Most people won’t be able to cut that much but enough to make difference.

To increase income, on the other hand, usually takes time; our income started growing about eighteen months after taking the first steps in this direction. Well worth doing but don’t expect any low fruit here.

I have friends who have very nice lives on relatively low incomes. They do it by cutting/watching spending. However, I can see three problems with that:

In a nut-shell, cutting/watching spending all the time can not only restrict your life, but it also is an energy suck and limits growth.

If you want to ‘grow’ you need to increase income; frugality, particularly of the extreme variety, doesn’t cut it.

Finally, cutting expenses, even if it can allow you to reach financial independence of sorts and retire early, is unlikely to lead to prosperity. Here I don’t mean driving a Ferrari and taking Champagne baths; what I mean is to have ‘enough and then some’ so that you could do some good. Even if you don’t have the desire to become obscenely wealthy!

The reason is a simple one: cutting expenses has strict natural limits which are at  the basic level of survival. Increasing income, on the other hand, has no ‘natural’ limits. How much you earn depends factors most of which are within your control.

There is a lot to be said about the virtues of cutting expenses; controlling spending is a corner stone of healthy personal finances. In the long run, however, increasing income trumps cutting expenses as an avenue to prosperity.

Our personal finances at present are described by the ‘Prosperity Profile’.