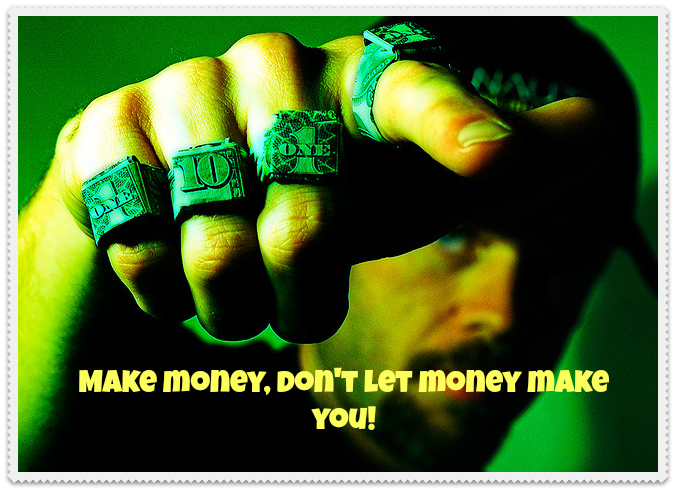 Would you take financial advice from a rapper?

Probably not. Most people would rather talk to a personal finance advisor.

Cool; if that’s is your swagger.

Still, there is much to be said about learning and variety. And there is a lot to be learned about making money, business and success from rappers.

How do I know, you may ask? After all, you wouldn’t expect a middle aged, female, philosophy professor to hit you with quotes by Eminem and Jay-Z; or to know anything about the latest on the Nigerian hip-hop scene?

Well, you may wish to change your expectations. I listen to rap; I’ve listen to it for about fifteen years now. Rap has a steady beat and angry poetry that go well with long distance running.

Rap is also a connection to my teenage son: I introduced him to it and he loves shocking his friends by calling me ‘my swag mother’.

When teaching, I sometimes use references to rap as an aid: a casual reference to Eminem or Young Jeezy gets me the attention that long dead philosophers and living methodologists can’t even begin to compete for.

There is a lot in rap that I disregard. I pay no attention to talk about ‘b*tches’ and crude references to s*x pass me by. As to the swear words, I haven’t got to my age without knowing and using most of them.

This out of the way, let me tell you why I think that rappers have a thing or two to teach us about making money. And I’m not talking about spending it on gold teeth, diamond filling and gold plated cars.

Not convinced? Here are three messages about making money I took from hip-hop; I could extend the list but there is little point in that. Here we go:

Do you think these make sense?

Now, let me tell you why you should listen to rappers when they rap about money.

How much do you make per year?

Okay, you don’t have to answer this one. I, at my age and career stage, make six figure income (in dollars, I hasten to add). Yep, I have two Masters degrees, couple of PhDs and have been in the academic game for well over twenty years now.

I like engaging in casual empiricism; so while browsing a site called CelebrityNetworth I found how much the top five rappers charged for a concert in 2012 (there is no information about Birdman, Dr Dre or Diddy):

Even the lower paid rappers charge a decent amount for a gig:

Reason 2: Rappers have a lot of money

What is the image of a rapper?

Gold teeth, diamond fillings and bling, right? There are exceptions but generally hip-hop is an ‘in your face’ culture.

Rappers, notably the absolutely top ones, are not only about the BS, though; they make a lot of money and keep most of it.

Here is a list of the ten wealthiest rappers in 2014:

Serious wealth, this is!

Rappers make money rapping, true. The wealthiest amongst them, though, make most their money through savvy investments.

Sean ‘Diddy’ Combs is the wealthiest rapper ever; he is the founder of Bad Boy Records but a relatively small proportion of his wealth comes from music ventures. A lot is from his deal with Ciroc Vodka and owning TV channels (Fuse TV and Revolt TV).

True. This guy is in every kind of business from fashion and sports agencies to deals with Duracell and Budweiser.

As to Dr. Dre, his most profitable venture is Beats by Dr. Dre headphones.

Would you listen to one of these guys when they rap about starting a business?

Reason 4: Rappers have struggled with money

And the most important part is that these guys are largely self-made. They come from housing projects, they used to hand at corners with their homeboys (and homegirls).

They were just kids with a big dream, a bit of talent and a lot of grit.

Let me ask you again: would you take financial advice from a rapper?