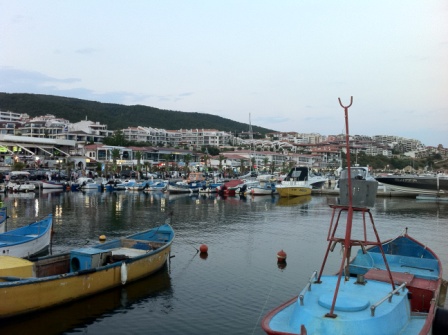 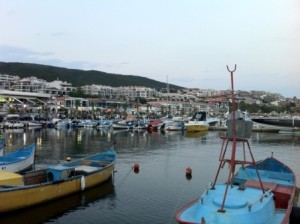 We are back after a week at the sea side; to say that it was glorious will be an understatement. It was so restful – we rented a comfortable apartment for a week at the cost of £200 ($350) which fills my PF blogger heart with joy and satisfaction. There were seven swimming pools – including one just under our balcony – and the sea was not even 100m away. Food was great: delicious tomatoes and feta cheese for lunch, and either something simple in or eating at a nice restaurant at the marina in the evening.

I ran and my training for Lausanne marathon is in full swing; John and Philip swam in the sea.

Only thing is that there was no internet; well, the apartment boasted wi-fi access but in reality I was lucky if I managed to sneak a peek at my e-mail on my iPhone. At first we were naturally disappointed but after the withdrawal symptoms were gone we realised that a week of electronic detox will only do us good. So we read books and talked and rested.

This is why, the publication schedule of The Money Principle has gone all over the place. After today though it will all fall in step again.

Now, let me tell you about the articles around the blogosphere that caught my eye during the last week or so.

I have already published several articles about the power of small changes enacted with regularity. And you already realise that another way to refer to these changes is as ‘habits’. It is great though when you see something you really believe in written by a great Master: go and have a look at Seth Godin’s short piece on crash diets and good habits. For that matter, go to Seth’s blog and read around a bit – he writes little pieces studded with the wisdom of great mind and erudition.

There are many Russian tourists at the Black Sea coast and watching them – and their children – made me reflect on the way in which previously materially ‘deprived’ societies tend to over-compensate. Having witnessed the rampant and, let’s face it, rather vulgar consumerism of many tourists, it was refreshing to see the ten suggestions of Leo Babauta abount how to raise minimalist teens in an age of consumerism. Don’t know about you but I am certainly going to try some of the tips and pray that I have the presence to enforce them and they work.

Do you dream of and work towards building passive income streams? I know I am. But I will never consider my blog, or blogging for that matter, to be such: to begin with it is more of dribble than a stream and second, it is far from passive. Kevin at Out of Your Rut has made some very good points about why blogging is only relatively passive. And still too much fun!

I have long believed that what we refer to as ‘civilisation’ is actually creating even more noise competing for our already tested focus and concentration. Want an example? Think about how long did you spend today on distractions! How many times you checked your e-mail? How many times you went on Twitter, Facebook and how long did you gaze wistfully at your phone wishing it will ring or at least bell for a message? I know I did and I don’t like it: my writing needs me to keep focused not to do all possible to avoid doing anything even remotely productive. Then I read Joe Pawlikowski’s article on Write to Done; and you should read it too. It is not only for writers; it is for people who waste their time and lose their focus.

Anyone who has ever been in debt knows that it can come to dominate your life; hell, it can eat your life away. It was great to see AverageJoe’s reminder that getting out of debt is not a goal. Then again, money related things are hardly ever self-referential – it is about life!

Our mind is a powerful tool; and just like any tool it can be used for great achievement or for a complete and utter failure. In two articles Barbara Friedberg discusses mind and money – well worth a read!

Apart from that, The Money Principle was included in seven carnivals of personal finance. These are:

5 thoughts on “Principled Money Posts #20: ‘we all like to be beside the sea side’ edition”