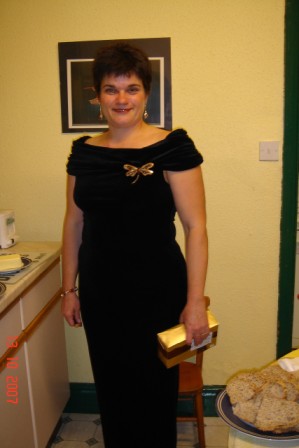 The other day while clearing my desk draws, blast this ‘clear your environment’ stuff, I came across a CD. Curiosity won (as it usually does with me) and a minute later I was looking at pictures taken on the day of my 45th birthday. I was looking at this 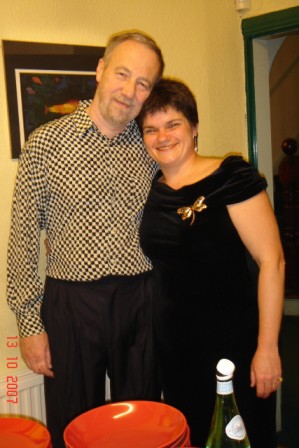 OK, ‘vamp’ may be over-stating the point a bit but it made a really good title (or so I thought). But look at this woman: trim (nothing hangs), tastefully dressed in an evening dress and smiling contentedly at the camera.

Move three years forward and you get to this 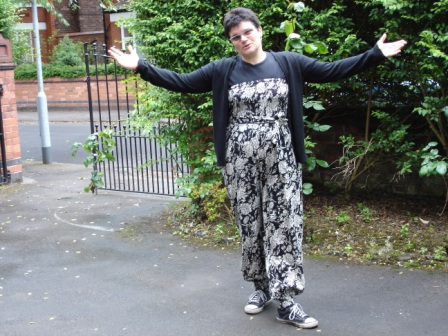 See the difference? On their own, neither of the images of me are ‘vamp’ or ‘frump’; put those together and…well, you get the picture. I am not even going to bother to publish a picture of me at the moment!

How did this happen?

‘Oh, the first one was taken before the debt (before the knowledge of it); so you looked better after yourself.’

To which I’ll answer that this is loads of old rubbish. It was before, true, but the dress is not that expensive (and I still have it), the frumpy dungarees are not that cheap and the body was because I was running my first ever marathon in ten days. As to the smile we all know that ‘smiling is a state of mind’ not an outcome of circumstance.

Others may helpfully point out that this was five years ago; which doesn’t really explain the ‘frump’ but…whatever, as my teen son would say.

Now about the ‘back’ part – I’ll be publishing another picture in October, 2013; watch this space. Particularly because, as you may remember, my words for this year are ‘health and wealth’.

Now about what’s been up around the blogosphere.

Let’s start with an old favourite of ours, 101 Centavos. This week, in his usual ‘no nonsense’ style he explained why there are many situations in life when it is better to pay a bit more. Yeah, settling for a sloppy job and bad behaviour just to save a bit is not the right thing to do – ultimately it works out more expensive. Fact!

My relationship with the Money Crashers is an interesting one: I often stomp off in a huff but then I go back for more. Call it dysfunctional if you wish! This week, however, they published article on the relationship between chemicals in our body and financial habits. It all makes sense: don’t smoke and drink, keep positive through exercise and the $$ will stop flowing out like a broken dam. Simples!

I know that some don’t dig success ‘I paid this obscene amount of debt’ stories; or have just had too much of them. I, on the other hand, believe that consumer debt should be paid off and the faster the better. That’s why reading that Tony at We Do This Only Once is following in our footsteps and paying off debt like…well, like they are doing this only once. It is a good article – follow the link. As a bonus you will discover the Canadian Budget Binder – worth a look as well.

No, this can’t be ‘great minds’ kind of moment, can it! You know how I have been doing the ‘slow burn’ ultra-distance training? One of the main messages is that fat is not the enemy; quite the reverse – certain fats are good for us. Sugar is the substance which, were it to need an approval today, won’t be approved for human consumption. (OK, ok, I still crave it; but I crave other stuff as well…) Guess, what Mr Money Mustache is talking about? Yep! Changing your eating habits; and saving your wallet in the process. Some great recipes as well – don’t worry about the calories. Not all calories are born equal!

Did you think investing is boring! Think again; and while doing it read the article where Pauline from Reach Financial independence tells us about selling her cattle. Way to go, Pauline!

Let’s end with an old favourite as well: Control Your Cash. I’ve already said before that there are matters on which we’ll have to ‘agree to disagree’ (the importance of education being one of them). But I’ve always had a lot of time for Greg and Betty. Last week they published an article that is ‘a brief wealth building manifesto ‘. I mean, really brief and to the point. Go read it – it will take only seconds. (As a side note, I would love to be amongst the personal finance blogs worth reading but…maybe one day.)

What I found this week? Check these out!

Save. Spend. Splurge. – love this one. Anyone who pays off all their consumer debt in 18 months and builds a stash of a quarter of a million $ has my attention. Anyone who publishes an article justifying buying expensive underwear (and this makes sense) has my respect!

Making Sense Babe – this is good; no, this is better than good – it is great. Intelligent, fast moving, a bit daring and funny (when appropriate).

eTramping – a sweet site where Agness and Cez write about their super saving discoveries while travelling the word. Heck, this is about travelling again; I think I am getting the bug.

How did The Money Principle do?

Last week we were included in the following personal finance carnivals:

The Money Principle’s article ‘Take change of your finances: focus on ‘want’ rather than ‘needs‘ made it as one of the ‘awesome articles’ on Budgets are Sexy: I know only because I read the site regularly.

Any other mentions somehow get into my swelling ‘spam’ basket; somewhere between ‘penis enlargement’ (as if I need one), getting pregnant fast (well, there are miracles and miracles) and some really fancy Christian Louboutin red bottom heels (now you are talking).

I do check it when possible but sometimes miss stuff; sorry and big thanks.

Oh, and you may want read this: I was interviewed by Buy Here Pay Here (BHPH) and the link is here.

Pimping out Vexour (the bull) Garth

Talking investments, apparently spotting a promising bull and buying it (at any age) is good business. Meet Vexour Garth, the most expensive bull on the planet (sold for £105,000/$160,000). And the firm that bought him is looking to sell straws of his semen for up to £100 ($152) each.

This is all for today; speak soon.