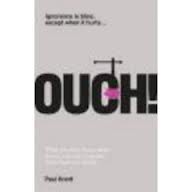 This is a very no-traditional book review of a non-traditional and epic book on personal finance.

Whenever I read a book on (personal) finance I can put it, and its author, in a neat ‘cubby-hole’. Yes, it comes with experience but I have read quite a few of those.

In my mind George Clason is ‘the story teller’, David Bach ‘the safe pair of hands’, Dave Ramsey is ‘the preacher’, Joe Dominguez is an ‘epic pioneer’ and Elizabeth Warren is ‘a rational moderate’.

Judging by Ouch!, no easy label can contain Paul Knott; one way to describe him – after all you can’t ecpect me to write a traditional book review – would be ‘a cross between Yoda and Kurt Vonnegut’. Why?

But I seem to be getting ahead of myself in this book review so let me take a step back. What is this book about?

Not surprisingly, after all it is being reviewed on The Money Principle, it is about money. This, however, is as close as it gets to more ‘traditional’ personal finance’: this book doesn’t offer advice on the technicalities of personal finance and investing but sets out their very foundations.

The point of departure is that we may be very smart, talented, educated and successful; still most of us have very rudimentary understanding of the world of finance – even the ones who think that they are financially accomplished.

This world is vast – the personal is nested within financial systems at different levels (e.g. national, global etc.) and is all locked in historical trajectories. This is the complexity part; there is also sheer ignorance, the refusal to acknowledge anything beyond our very limited experience.

Ignorance is the reason why seemingly intelligent and articulate people can be really rather simple about money.

Many would say that ‘ignorance is bliss’ but Paul doesn’t believe in clichés (thank goodness); this is obvious from the cover of the book that boldly states that ‘ignorance is bliss, except when it hurts’. This is why, he takes us on a trip to three domains we need to understand if we are to become much, much better with money.

First, he tells us about the origins, history and nature of money helping us to understand who controls it, how it increases, and its reality and fiction. This is done masterfully using examples that stick in your mind and expressions that are sometimes harsh but fair. Here Paul writes with eloquence and passion; which is true about the rest of the book as well. When he thinks he needs some help there is always Voltaire:

Got to love the guy; Voltaire, I mean. And I already mentioned in this book review that Paul’s book is erudite, didn’t I?

Finishing this part, I was exhaling: I learned a lot without major (secret) humiliating realisations. Immediately Paul moved to the human psyche – an informed and honest look at the weaknesses and flaws that are hardwired in our brains.

It is all there – self-deception, fear, love, faults of reasoning, abdication of responsibility, herd mentality and inability to distinguish between risk and uncertainty (of course the former can be calculated and the latter can’t). This is not just psycho-talk, you know; this means that when it comes to money (and many other things) our capacity to make choices and to act on it is very limited.

The third fundament of the book looks at the quality of information. Many personal finance bloggers either advise us to trust the professionals about investments (and the economy, and all matters of money) or cast themselves as such experts.

Paul reminds us that 97% of the ‘consensus forecasts’ (predictions by consensus amongst groups of economists) are wrong. This is rather high, don’t you think? Then again, I will think so; the mistrust between sociologists and economists is deeply ingrained and long standing.

Jokes aside, Paul’s reasoning is sound and convincing; instead of trusting ‘experts’ we have to understand how the market operates. This is the rational part of becoming better with money and making it work for you. The rest is about restraining your brain and ‘conquering yourself’. This is not only ‘personal’ – it is also very practical.

But if you want to ‘enter the dojo’ and make fight you will have to get Ouch! and follow the practical advice offered very closely; you won’t regret it.

Would I recommend Ouch!? Most enthusiastically! It is well researched and written, thought provoking and entertaining.

But be warned: this is a serious book and it deserves serious attention.

6 thoughts on “Beyond ‘I told you so’ is ‘Ouch!’: book review of Paul Knott’s epic book about finance and so much more”