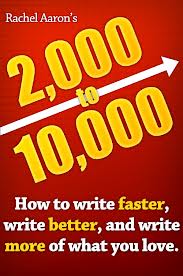 Have you heard about Rachel Aaron? I won’t be surprised if you have not – after all she is a writer and a reputedly a good one since she manages to make a living with it. Until about a year ago when I came across her website – Pretentious Title – I hadn’t heard about her either; after all she is known for the Eli Monpress novels and there is so much teen fiction that I can take.

What drew me to her website were rumours that she had increased her writing productivity and gone from  2,000 to 10,000 words per day; and before anyone says something smart here, there was none of The Shining tricks here. She didn’t write ‘One sparrow does not a summer make’ repeatedly to make the words – all writing added up to a coherent story and it took exactly as long to write 10,000 words as it did to write 2,000.

How did Rachel do it?

Well, she set out the backbones of the method she stumbled across in a blog post which is probably one of the most read around the blogosphere. Recently she brought together the original post and all that followed (and all of it is about writing) in a booklet entitled 2k to 10k: Writing Faster, Writing Better, and Writing More of What You Love.

What is the secret?

When under pressure from life (a new baby) and work (being late with a novel) Rachel stumbled across her first break through – she was so muddled in a scene that she had to map it first (with a pen on paper) and then write it on her computer. What she noticed that the words were flying from under her finger and it seemed the scene is writing itself. Her word count more than doubled. Then, being a self confessed nerd she started keeping a record of what she does where, for how long and with what result. And last but not least she used her record to work out the last of the three magic ingredients.

Ingredient 1: Know what you are writing before you write it

Rachel found that if one wants to write faster knowing what you are writing before you write it helps. In my experience it doesn’t matter whether you are writing a novel, a short story, an academic article or a blog post: working out the ‘skeleton’ of the ‘story’ speeds you up considerably.

I also found that using mind mapping to figure out what you are writing works best for me – it is memorable, fun to work out and all on one page.

This is not exactly time but more like time-keeping. Just like when we try to lose weight or control our finances, Rachel decided that she is going to keep a record of when she starts writing, when she stops, where she writes and how much she writes. In other words, all information that will allow her to notices patterns in her productivity. She found that her productivity peaks when she is not at home and that the longer she writes the faster she writes.

The important thing, however, is that she kept a record for two months to be able to see patterns. What can speed you up is keeping a record, analysing the data and acting on the information. I am going to do it!

Last but not least, Rachel noticed that she produced considerably more on days when she felt really enthusiastic about the scenes she was writing (to figure this out she used her records).

So she started getting herself enthusiastic by imagining the scenes; if it still didn’t work she tweaked the scene till she felt really excited about it.

Today, most of us rely on writing in their jobs. Different writing but writing nevertheless. Most of us spend longer agonising about writing than writing; many of us end up trying to write very long hours to make the word count.

Increasing our writing productivity can make us so much less busy!

And do you know what? Rachel Aaron’s book sells on Amazon for about $1 (Kindle edition). This may be the best dollar you spend!