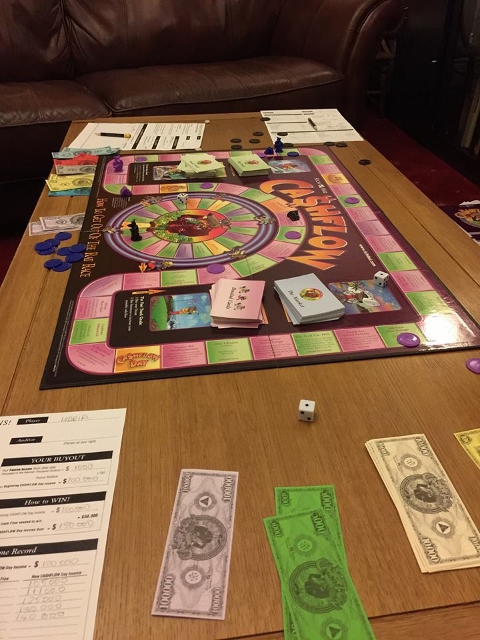 Have to tell you that because of the Cash flow game I’m even prepared to forgive Robert Kiyosaki for writing Rich Dad Poor Dad.

We have the game, we played it when our son was young and we play it now when he wins nearly every time.

We taught him well to play the Cash flow game. We are still better at playing the ‘real game of wealth’.

Do you know where is the difference?

We used the Cash flow board game differently. Our son, for instance, learned all about the ‘rat race’, taking risk, saving your money and not incurring many dodads.

We, the grown ups, used playing the Cash flow game as a sandpit where we practiced different strategies for building wealth. (Some of these strategies have translated into building real life wealth.)

Here are the money lessons we learned from playing the Cash flow game; and may these continue serving us well into the future.

Playing the Cash flow game: this is how it all started

Several years back, John and I realised that we have started taking life far too seriously.

‘Do not take life too seriously. You will never get out of it alive.’

Add to the equation having a young son who still wanted, and needed, to play with us. Play is all about learning life skills. Hence our choice to buy the game of Cashflow hopefully starts to make sense.

We bought Cashflow, the game invented by Robert Kiyosaki and, reputedly, based on his experience of ‘getting out of the rat race’. (I’ll take this one under advisement but the guy is still worth approximately $80 million. This tells me he knows a thing or two about money, how to make it, keep it and grow it.)

Whilst excited by the Cashflow game, and eager to learn more about ways to increase our real cashflow, I have to admit my expectations were limited on two counts.

First, I am not big on board games and I most certainly am not very keen on, or good at, playing Monopoly; particularly after John explained the statistical probabilities of throwing a dice.

And second, reading the rules, the board game of Cashflow appeared  complicated; I doubted whether our young son could play.

How wrong I was on both counts: playing Cashflow is highly enjoyable and our son learned to understand the game of money.

How to play Cash flow board game?

After choosing a card with their occupation, salary, savings and expenses on it, each player’s aim is to get out of the rat race.

Just like in life, one gets out of the ‘rat race’ when their monthly expenses are lower than their monthly passive income; or, put differently, when they have become ‘financially independent’.

Getting out the rat race places you on the ‘fast track’ and the game is won by either landing on your dream (which players select at the beginning) or by generating $50,000 passive income on top of the starting amount (starting for the fast track which is 100 times your passive income that got you out of the rat race).

How did playing Cash flow go?

In the first game we played, John was a truck driver, our son was a lawyer and I was a teacher.

We had different incomes: our son’s income was the highest and John’s the lowest. We also had specified corresponding levels of expenses.

I won; largely because of luck since I landed on my dream and had enough money to buy it. John was the first to get out of the rat race, though.

Over time winning became hard to predict as John and I were experimenting with different wealth building strategies. Our son became rather good playing the game as well.

Win or lose, playing the game of Cashflow is always very good fun. Even now we are thinking of starting a Cashflow playing club only for grown ups. (You can’t beat playing Cashflow and beer; not really.)

Money management and investing lessons from playing the game of Cash flow?

Playing the Cash flow game is an opportunity to test different scenarios and options for getting out of the rat race. Here are three messages that are immediately apparent.

Winning the game at the first stage is dependent on having enough passive income to cover your expenses.

Getting rid of liabilities (loans, bad investments etc.) and not acquiring more of them (houses that take money out of your pocket, new cars, boats etc.) is the way to reduce expenses and speed up the process.

It really helps if one tries their hardest to keep emotion and feeling out of this. When we played our first game of Cashflow I didn’t manage to do it. When I got some cash from flipping a property and selling shares I paid my mortgage off because, in the game just like in life, this makes me feel secure.

Paying my mortgage, however, meant that I didn’t have enough cash to buy a very good deal which generated three times the money needed to pay my mortgage. Consequently, I borrowed from the bank at 10% when my mortgage was at a fraction of this interest.

John, on the other hand, didn’t pay his mortgage off and got out of the rat race much faster than me; in the first game that is.

Key message: Get rid of liabilities but the sequence is important; don’t make paying your mortgage off a priority but build up an investment portfolio – its time will come.

One side benefit of playing the Cashflow game is that it has made my marriage easier – paying off the mortgage was always a point of contention between us (I insisted to pay off fast and John was saying that this is not the smart thing to do. Guess he was right).

Lesson 2: Build up your stash

Winning the Cashflow game depends on one’s ability to ‘build up a stash’.

What is also clear is that the available strategies for doing that are different at different stages of the game.

At early stages, for instance, building up financial resources is mainly done by saving.

Once there is a neat little sum one can start investing in shares and bonds and taking calculated risks becomes important: it can speed you up considerably.

Buying real estate, both to ‘flip’ and for rental income, is the next building block. The big money, however is in buying businesses.

These stages are overlapping but sequential.

Key message: Build up your stash; be patient; keep informed and do not get emotionally attached – all is for sale and all is fair game.

Buying assets is the third critical element to winning the game.

Early on, there is an element of gambling and luck plays an important role.

At the later stages of the game planning is possible.

Most importantly, money is made when you buy not when you sell.

Key message: Buy or grow businesses; focus on developing an eye for buying.

Good time was had playing the Cash flow game. More importantly we all learned much about many aspects of money.

Some of us used the game of cash flow to play around with real life strategies for building wealth.

Applying the game strategies in life though is not so straight forward.

Whilst the broad rules may be the same, there are two substantive differences: one, there is a very steep learning curve; and two, our capacity to take risks, even calculated ones, is restricted by the fear ‘of losing it all’.

16 thoughts on “Cash Flow Game: How to Play and Learn the Strategies for Financial Independence”