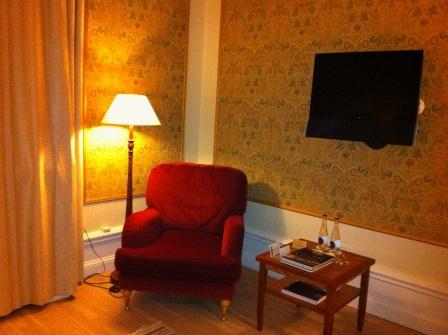 After two flights and a short train journey I have finally arrived – in the Grand Hotel in Lund, Sweden. And before you start thinking that I am ‘jumping the niche’ – from personal finance to leisure and travel – this is not the case. I have always travelled rather a lot for work and after the writing productivity of the past fourteen months this has become even more so; it may be that very soon I’ll have to overcome my vanity (yep, it is very flattering to be invited places to talk about what you love to talk about anyway) and learn to say ‘no’; and often. Selectivity though is an art form and has to be mastered; in simple terms, it is much harder than indiscriminate acceptance – the former involving taking charge and the latter just succumbing to what comes about. I can see the next learning area appearing.

For now, I am in the Grand Hotel feeling grand and waiting for my colleague and friend to go to my favourite pizzeria. I am on my own and this is the first of a string of weekends when I’ll be away and missing John and our son; missing out on family time and on my karate training. Is it worth it? Well, this is something that only the future will tell and for the time being we’ll have to content ourselves with the thought that ‘it is how life is’. At least for now!

More to the point, being on my own always leads me to reflect; until recently this reflections were tarnished by negativity, by never being happy with what I have done and how much has been done. I am not sure whether this is an effect of being fifty, but today I looked back on January and thought:

‘Not bad, not bad at all. First academic article for the year has been submitted; first research proposal was submitted; the first publication for the year was confirmed; and I am here, to do a public lecture on what fascinates me. And to plan the next five to ten years with my colleague(s)! I am a very lucky woman (this level of luck took about 20 years of hard work but still …).’

But enough of that; let me tell you about few of the blog articles that caught my attention during the last couple of weeks.

I have now long believed that in a quest for fashion – be it in dress or thought – we tend to forget about the simple truths that in fact contribute much more value to our lives. It is the same old story of the little boy shouting ‘the king is naked’. One of the dominant themes in personal finance, and most of the internet entrepreneurship for that matter, is that of ‘passive income’. Don’t believe me? Just do a simple Google search; you may find that articles on how to have passive income (and retire on it) are up there with…well, the most popular ones. So, I do find Adrian’s site, 7million7years very refreshing; most of the time Adrian is really good value and offers a contrarian but obvious view point. In his latest article he clearly spells out for all ready to listen that there is no such thing as passive income and that this is all a myth. All income is active – in other words, one has to put effort in generating it. You know what? I agree: it is not about passive and active income; it is about selling you labour or making your money work for you. In both cases, one should keep one’s eye on the ball.

The Financial Samurai published an article on Yakezie website arguing that people stop spending when there is uncertainty and they feel insecure. So far so good! Next, he goes on to argue that the opposite is true – people spend without thinking when things are settled in society and economy and they feel very secure. Therefore, the cure for spending is to make people insecure. Interesting argument and it is not the first time I’ve heard it or had to disagree with it. The previous Vice-Chancellor of my university used to upset the administration every two years or so which I though is a necessity because of a rather challenging merger. Then he told me he does it because he thinks this is how the organisation becomes more creative and entrepreneurial. Which is complete and utter BS – organisations need administration and administration thrives on routine; every two years all energy went on re-adjustment instead of teaching students and organising research. Sam’s argument is not acceptable because feeling secure is only one variable correlating with spending behaviour; and likely not THE one. Right or wrong, this article has been at the periphery of my thinking for some days now!

My friend and running buddy AverageJoe (who is by no stretch of imagination average at all) publishes really good stuff about personal finance and investing. Today though, I’d like to mention his article on the top movies of 2012. Have a look – and then watch the movies. I’ve seen them as well (well, most of them anyway) and don’t agree with Joe only on one – Reacher (and this is about the choice of actor to play Reacher, the tall, handsome and slightly Aspie character from the novels of Lee Child).

Pauline has been publishing her thirteen money resolutions for the year – here I’ve linked to the last one, ‘enjoy’, but if you have missed the posts go and read them. They are all one can desire from an intelligent and thoughtful personal finance blogger – well thought through, well written and the main thing: they go beyond ‘spend less than you earn’.

Edward always manages to surprise me; you should try reading his stuff so that you know what I mean. The other day I went on his blog to see how he is doing and came across an article entitled Do you have what it takes to be a paper boy. ‘Oh’ – I thought – ‘Edward was really stuck for something to write about.’ Then I started reading; and didn’t stop till a finished the article – it was intelligent, thought provoking and gave me a view of life I know very little about. He also asked whether $1000 emergency fund is enough – and this is two impressive articles in a week. Good work, Edward.

Jason at WorkSaveLive belongs to the group of bloggers that provide masses of useful information. And a good job he does of that! His latest treasure?  An article sharing five easy ways to save money; and it is part of the debt movement which as you know we at The Money Principle support as well.

Glen at Monster Piggy Bank and his wife just had a baby. I would like to congratulate the new parents and say welcome to the world to little Nicholas – may your life be full of fun, joy and adventure.

During the last two weeks, The Money Principle was included in the following personal finance carnivals:

Yakezie Carnival at Narrow Bridge Finance
Finance Carn. for Young Adults at One Cent at a Time
Carnival of Retirement at Simple Budget Blog
Carnival of MoneyPros at Master the Art of Saving

Now, for the connoisseurs of human folly I have the following photograph: 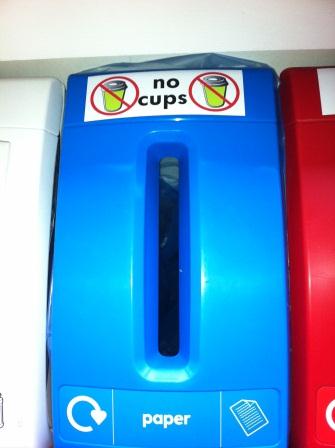 I took it at my office; could someone explain how would it be possible at all to put a cup through the slit of the bin?