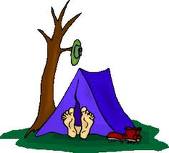 When reducing our spending, it is very tempting to try options that are universally considered inexpensive; such as camping, for instance. Succumbing to temptation and in the spirit of experimentation we went camping for the weekend. You should understand that for me this was a big step: the last time I went camping was over thirty years ago and my mum and I lasted only one night. After that, we packed the tent and moved in my auntie’s mountain hut. Funny story, I know; but it also means that I know next to nothing about camping, how to organise it, what is needed and generally how to survive it. Enjoying it is in an entirely different league.

We were very frugal, or that is what we thought, about the camping weekend. We have a tent which we have put up once before and we have sleeping bags. All else we borrowed – it is not worth buying it for an experiment, right? We piled everything in the car – we have a lot to learn to travel light – and off we went. It all went downhill from this point on.

On arrival we were assaulted by the greetings of hordes of flies, other insects and a relentless sun. Two hours and many bad words later we had pitched the tent and discovered that one of the beds is missing a part so hubby had to drive back home – lucky we chose a camp site nearby. Feeding a growing up boy was a trial – particularly because I had to wear all my clothes topped by my dressing gown so moving was an adventure in its own right. The first night was so freezing we hardly slept – the combination between hard, uneven ground and freezing weather made sure that the next morning was painful and bad tempered.

During the day it got really hot and burning; our longed for a carefully planned walk had to be changed and although we did not have heat stroke the sunburn could not be avoided. Before we knew it night had fallen again – this time sleep was impossible because what started at 1 am as an argument between fellow campers about money (or the lack of it) by 4 am degenerated into a stream of unimaginative obscenities. Next morning I had to explain the meaning of quite a few four letter words which had been added to the vocabulary of our son.

Now that you get the picture let’s do the numbers and see how cheap this two nights long camping trip really was.

Camping itself did cost a little under £100 – this includes the rates of the campsite, petrol (including the double trip home), food and drink. This doesn’t sound that much but for a little bit more one could spend two comfortable nights in a bed & breakfast.

You did not think that what I described went without consequences for my health, did you? I am still dealing with the physical consequences of this camping trip. Till now I have paid £144 for four visits to my osteopath.

Loss of productivity and innocence

Both hubby and I were so tired after our ‘cheap’ camping trip that our productivity was severely reduced for couple of weeks after that. Our son, on the other hand, learned the kind of words that he probably would have learned but in another four-five years. These two are difficult to cost.

I don’t know about you, but for me this is one very expensive weekend. Particularly because it was enjoyed by a third of our family and suffered by the rest!

Things that are seen as ‘inexpensive’ are often so cheap that they become really costly. Life is about experiences we enjoy, cherish and remember – these are the ones we ought to aim for and collect.

What are the ‘cheap’ things you paid great price for?

1 thought on “Cheap things that are very costly: who said camping is inexpensive?”