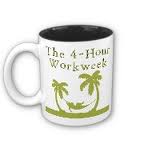 This review was written by Jan Armitage from Renovation and DIY: the green path . Thank you, Jan, for being my first guest contributor. I hope you are the first of many.

I read this book a few months ago from cover to cover.  And last month I re-read it, pen in hand, underlining things and writing exclamation points in the margin.  Just so you know.

Timothy Ferriss is a thirty something American – this is important, because the culture he’s writing for, and most definitely the sub-culture he comes from, is very different from mine.  And yet here we are, meshing happily away….  His assumption, which I think is correct, is that everyone who’s interested in reading his book in the first place will be able to benefit from some of the ideas in it, whether self employed or not, traveller or not.  It covers four sections, with the handy little acronym of DEAL.

Definition – who are the New Rich?  What separates them (us!!!) out from the old ways of thinking?  This is fascinating, and in parts extremely counter-intuitive.  He kind of ignores savings (although he’s quite clear that he also saves, it just isn’t the main point) in favour of how you’re living now, how you’re making your income now.  Designing your lifestyle, as he puts it!  And whether it is skydiving in South America, or extra hours spent with your little kids, is up to you. Definition here is about positioning oneself within the concepts of ‘new rich’ and ‘lifestyle design’ and embracing their principles.

Elimination – how to cut back to the bone through low information diets and selective ignorance, so that you can create space for your new venture, whatever it is, and become increasingly time-rich.  How many of us have email newsletters delivered to our inbox that we always just delete, because we haven’t bothered to unsubscribe? E-mail boxes so full we cannot see all messages on the screen? Do you open every e-mail as it comes? If you do you are wasting time you could use better, according to Tim Ferriss. Use batching, he urges. Use it for everything from placing business orders, to writing to dealing with the post. Collect the post and open it once a day but deal with each letter immediately you open it. I put this advice into immediate effect, and loved the result.

Automation – as Tim says, this is about putting “cash flow on autopilot using geographic arbitrage, outsourcing and rules of non-decision”. This means either revving up an existing sphere of work, or starting a new one, as far as I can see.   I’m not there yet personally, but I can see how to get there, which is wonderful all on its own.  I’m in the service sector, which he describes as not being amenable to this process, and I know exactly what he means – you can’t upscale indefinitely, because it is you doing the service.

Liberation – have regular mini-retirements, rather than one big retirement at the end of your working life.  For people like me, now within spitting distance of a conventional retirement age, this is not attractive, but his main point, I think, is simply that we should be living now, rather than only saving up not only our money, but also our experiences, for a mythical retirement way off in the future. It is also about carrying on working in a way that is not confined to one locality but can be done anywhere; this includes remote working. Tim’s own publicity is working against him a little bit here, because while the title of the book is really eye-catching, it doesn’t quite seem to work that way, not for him and not for the people who’ve taken on board what he’s been saying.

What seems to happen is that if people follow the very practical advice that Tim shares in the book and are committed to change, their options increase and they gain control over their lifestyle. Examples of people who have started online businesses, who have changed their work and lifestyle dramatically and who have negotiated their ‘liberation’ even when in full time jobs abound. To top it all, there are plenty of tips on how to do better and faster the things one is supposed to do. Or put differently, to increase efficiency and effectiveness at the same time.

In the most extreme cases, people seem to metamorphose completely in a couple of days.  For most of us, it can take six months or more.  But you know, if I was offered a step by step practical advice on how to change my life by increasing my income and decreasing my workload in six months, I’d be very happy to take it.  Tim is offering that step by step advice – how much of it you take on board is up to you.

There are series of exercises throughout the book to guide you on your way, and a great many of them are very helpful – I’d certainly recommend doing them.  I’ve just revisited my own work on the first set, and even though I’m not yet travelling the world, I was surprised at how many “job done” ticks I was able to put in place on what I’d written.

There are some things about which he’s silent, in a patchy kind of way.  For instance, he goes to great lengths to point out how to rent an apartment in a new city in the area you want, at a price you can afford, but nothing about finding the kind of food you like (I’m a vegetarian with a dairy intolerance, so I was bound to notice this one).  Of course, you can use your own initiative, or you can adopt the steps he outlines for the apartment and use the same steps to find food outlets you like, it is just odd that he goes into such detail on one, and ignores the other completely.

He also doesn’t write anything about the type of outsourcing that will appeal to most time-hungry people who start to increase their income or re-order their lives in any way – a cleaner and a gardener.  Maybe because you can’t outsource those to a foreign country!  Or maybe because although he mentions people who don’t go travelling, he finds that lifestyle so unattractive himself, he doesn’t want to get involved in things that support it.  Or maybe because he takes those for granted!  Don’t know – but taking those steps is so obvious if the money is coming in and you don’t want to do those things.

It’s just something to be aware of – this guy is really clever, he’s got a brilliant mind and he thinks laterally like the road in front has a police cordon across it; but he’s not a god, and he’s not even a guru – he’s a charismatic man who’s had some great ideas, he’s put some things together in a really interesting way, and published a really thought-provoking book.

Would I recommend this book?  Absolutely – whether you want to free up some time, start an online business, or go travelling, or any combination of these things – this is a great book.