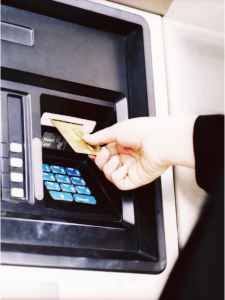 This is the second of the guest posts by John Logsdon from readysteadygowebsites.com.

Imagine the scene. You go to your bank because you want to paint your house which will cost £1000. The bank manager looks in the books, sees that you are a ‘good risk’ and checks the authorised lending level, which requires the bank to have 10% of its lending (it used to be 3%). The manager alters some numbers on the computer and hey presto, you have £1000 to spend.

You have the work done, pay the painter who puts his money in his bank and decides he needs a new van. He goes to the bank which also considers him a good risk, and bingo! he has £10,000 to spend on a new car. This he buys from the chap next door who is already quite rich, pays in the money and suggests he needs £100,000 for a new Porsche. The bank now has £10,000 so it can lend him the money and off he goes in his new wheels. And so on.

The bank has in fact created all this money, starting from only £100. It has enabled a lot of work to be done, items to be bought and general economic activity to occur. Great.

But every time you borrow money, this becomes your liability and the bank’s asset. In very little time the bank will have amassed ‘assets’ of billions of pounds. So they build massive tower blocks not so much out the interest they charge, which is large enough, but out of the money that they have ‘created’, for which you (will) have worked and repay – in addition to interest.

In other words, you work for them, literally. We all do. Not for ourselves, our employers, the government, the state or even Her Maj. We work for the banks and every penny we borrow gives them an excuse to print even more money which they can lend out, secured on the property that they have bought with your hard work.  You don’t borrow money?  Well you may not but someone down the financial food chain that feeds you surely does.  Amazed?  Well after all the posturings of politicians and businesses, perhaps you could be excused but this, in a nutshell, is how it all works.

What a wonderful business to be in – better than being Al Capone or a Columbian drug smuggler. who risk going to jail every time. But a bank – phew! What a good idea.

In the old days when money was linked to a commodity like gold, the total money was fixed. This was disciplined but inflexible – nothing got done. With the introduction of fiat currency (paper money defined by a government) which can in principle be printed at the cost of the paper, controls were set up so that money supply could only be ‘increased’ under very stringent conditions.

With the ‘Big Bang’ of the 1980s, the generation of money was effectively outsourced to the private banks and from then on, banks have been free merchants able to lend ‘sensible’ amounts to whoever they want with minimal constraints. Computers have enabled this to be done much more easily.

Banks are privileged. Only banks can create money. If the Central Bank (BoE etc) does so, it gets called to account but private banks can do so with impunity and only their senior management and shareholders hold them to account. Except the management have been shown to be incompetent and the shareholders have been bailed out by the taxpayer, for which we are all now paying.

In a recent post on this blog – ‘Who holds the strings‘ – Maria reported that 75% of the core 147 world corporations are financial intermediaries with an incestuous inter-relationship. No wonder. They generate the stuff, lend it and generate more. And when there is a war, even better – they lend to both sides.

I wouldn’t want to return to the strict credit controls of the 1970s and earlier. Nor would I want to move to the worse state of full reserve banking where a bank has to have the money before they lend it out. This stifles growth. But I would want some recognition that the responsibility that banks have because they have clearly been ignoring it.

This privilege needs to be recognised so my first action as a World Leader would not be to stop banks printing money at all but to ensure that they recognise the special position they hold vis-a-vis the currency they are generating. I would therefore set a tax on the money that a bank prints – or generates – and that is not covered by deposits with the Central Bank of the currency in which they are lending. This tax should not be that onerous but would effectively be a recognition of the special position which banks have as custodians of money.

I call this a Funny Money Tax (maybe a more serious name could be invented) and it would be paid to the Central Bank as a recognition – and insurance. This should be paid forever. It would not depend on the head office location but on the currency – American and other banks lending in Sterling would be just as liable as UK banks and vice versa once other countries do the same. Because it can raise substantial amounts of money without hurting the voters, it would be popular and because banks would want some slice of the UK action, they would not be persuaded to move offshore.

On the back of a very small envelope, a tiny 0.1% tax would raise something like £2-3 billion a year and it would be permanent. There is a case for a short term higher rate to recover the losses incurred by the taxpayer in bailing out the banking system. A 1% tax for a few years would restore public finances, repay the Bank of England for all the Quantitative Easing it has had to carry out and shore up other parts of the economy without the cuts that have yet to hit us hard.