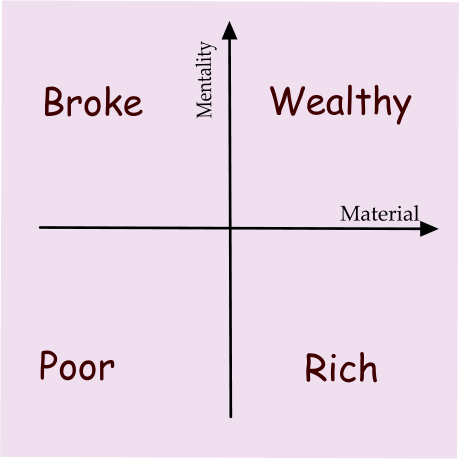 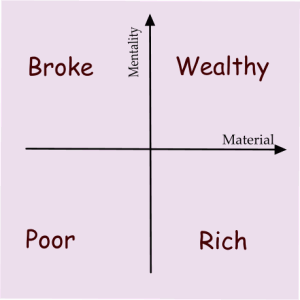 I know exactly how this sounds! It sounds daft and obvious, right? Ok, let me tell you; it may sound daft and obvious but it actually is far from it. In August I published a piece (The Opposite of Poor) where ‘poor’, ‘broke’, ‘rich’ and ‘wealthy’ were discussed as including two different aspects – material and mentality. This is how these four ‘situations’ were positioned on a grid between their material and mentality dimensions.

The next question that I have been puzzling over is how does one move from situation to situation? Here is what I have been thinking about moving from ‘poor’ and ‘broke’ – I focused on these two since they are most interesting to me and I suppose to my readers. If there are any secret millionaires reading this blog, be they rich or wealthy, I apologise for ignoring (temporarily) their plight.

Moving from poor to rich is possible only as an ‘accident’ – this can be accident of birth and inheritance; accident of birth and some exceptional and very highly valued gift (footballers); or chance winnings (lottery and stuff). It is interesting that moving from negative to positive material position is very unstable if one’s mentality is unchanged. In other words, people who win the lottery can be ‘rich’ for some time but most revert to their initial state of poverty (or relative poverty).

Apart from these ‘accidental’ moves it is not possible to move to rich or to wealthy…negative mentality prevents this. On top of everything, during the last couple of decades, there has been research on the ways in which having to make choices has a high cost: it makes us tired, distracted and it is easier to make big mistakes. The same is true about financial decisions; even more crucially, materially poor people have to choose following rigorous debate even about little things – the trade off between a bus fare and a loaf of bread, in some cases. Being materially poor is tiring and being tired is a dangerous swamp. There is a level of material poverty beyond which changing one’s mentality without external help is next to impossible.

Verdict: Getting out of being (or seeing oneself as being) poor (apart from it being accidental) can be achieved by becoming ‘broke’ first. This means, that the material level of existence ought to be stabilised at an acceptable albeit possibly basic level first. Following that, one ought to work on their mentality; if restraint is exhausting switch to motivation; if the future you foresee depresses you change the vision and work backwards; train yourself to see opportunities by asking more questions; etc.

Being ‘broke’ may be materially hard for some time but it is a really great position to be in – it is so full of opportunities. This is the one form where people can move – almost seamlessly – to being ‘wealthy’ or for that matter to being ‘rich’. Moving to being ‘rich’ would be associated with at least partial revert to negative mentality – even if that is only expressed in the way in which the accumulated riches are used.

In fact, from ‘broke’ one can revert back to ‘poor’ – our mentality is by its very nature unstable. Beliefs, attitudes and behaviour can change quickly depending on our varied and immediate experiences. If one pays attention to make these ‘habits’, however, it is very unlikely that any drift into ‘poor’ will be long lived.

Verdict: Being ‘broke’ is a trampoline to both being ‘wealthy’ and being ‘rich’. It seems to me that it is more likely (given appropriate other action) to be catapulted into wealth because of the underlying link of positive mentality.

Material prosperity is hard to achieve if one doesn’t change their mentality. And please, don’t even mention the lottery to me! I am not falling for it!