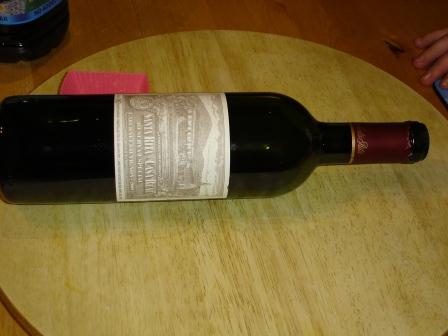 We are debt-free today!

And what you are looking at is the expensive bottle of Cabernet Sauvignon that I brought back from Chile and it is empty; it was drunk last Friday and it was really great wine. Even greater was the occasion – we said that we will drink this wine, just the two of us when we have paid off completely our consumer debt and become debt-free.

To become debt-free we sold only one thing: my car. Have to admit I did take it hard – this bright yellow Smart For Two was so much me – but looking back it was a good move that we ought to have done even without being in debt. This was not a safe car to drive and we don’t need two cars anyway.

How did we do it? How to pay off debt?

Mostly by following simple personal finance rules and developing healthy money habits. I also developed a system for paying off debt and living debt-free that combines working on emotions, learning and taking action.

Debt consolidation is not always a bad idea and in some cases could be very useful.

Most of our debt was on seven different credit cards and two of them from MBNA (ie BoA) had increased their interest substantially for no reason. Taking into account this and that managing so many cards may be a logistics nightmare and very time consuming we approached our bank for a consolidation loan.

We had been with our bank for decades and are very good customers; after all, during the first year of debt repayment, we single-handedly kept one junior employee in a job.

Hence, our bank was very good to us in return and after a discussion with our personal bank manager, we took out an £80K ($126K) consolidation loan secured against the house at 7.7% interest. On January 4, 2010, we had a consolidation loan to run for ten years, approximately £16K on credit cards and overdraft.

Ten years! Talking ultra-marathons; though at the time it felt to me more like a prison sentence.

Most people go through their lives not understanding what money is and how it works. Some don’t even mind.

I am not one of those – I believe that ignorance is an infliction and it has to be eradicated. One of the first things I did after the crisis had abided emotionally and rationality returned, was to start learning. I learned from websites and blogs, self-help type books and from academic literature on finance and economics.

We found that our lives were substantially over-insured with the wrong insurance, our house insurance cost twice what it should, car insurance could be trimmed and we checked all our utility bills.  Most recently we realised that we had forgotten to check the water costs and found that by moving to a water meter, our water bill more than halved.

But we didn’t stop with the learning and knowledge; we acted – we tried things, when they didn’t work we modified them and when this failed we thought of and developed completely different approaches. The Money Principle was to a degree a result of, and a platform for, this learning and experimentation.

#3. Earned much more than we spent

This is a well-established mantra in personal finance and at its most basic is a very simple matter of first-grade arithmetic. Where it gets exciting is when one starts thinking about how to do it.

We did it as a combination of rationalising our spending and increasing our income. For years, I lived under the impression that what we bring in regularly every month is not enough for us to live on (my salary and some passive income) – that we can’t survive without John’s consultancy pay. Since it was the failings of the consultancy that got us in trouble, to begin with, I thought that we simply cannot make it.

When we looked at our spending it turned out that we can live on our regular monthly income even including the close to £1,000 ($1,577) monthly debt payments. We needed to change some things, true. We changed our insurance; I stopped having so many coffees and over-priced, nutritionally challenged meals at work; started cooking and eliminated waste. Hey, presto! We could not only live on our regular income but also put £500 ($788) aside every month.

This meant that everything earned above our monthly income could go on debt repayments. When consultancy picked up again we used it all to pay off the loan; when The Money Principle started making a bit of money – it all went on the loan. Gosh, even the £500 per month we were saving for a rainy day went on the loan – paying this loan off was the rainy day.

And in case you are wondering, we had such large accumulated historical losses in our company that the taxman didn’t get a bite! Well if we hadn’t had the losses, we wouldn’t have been in debt but that’s another story.

And it was so satisfying to see it go down!

You don’t have to be very observant to have noticed that the strategy was ‘throw everything at the loan’. But there was order in our debt busting frenzy and this came through realising two things.

First, no payment is too small to have an effect. Most people waste their lives waiting for the ‘big break’ – they wait for this big promotion, for the inspiration to write an award-winning book and for the large windfall of money. But in all matters the old adage of long-distance running training still applies:

What makes you fit is not the seven miles you run on the weekend but the one mile you run every day.

Translated this means that even a large debt starts crumbling when you make regular payments be it not so large ones.

Our second realisation was about the tipping point of the debt payment. When you start paying debt off – and for quite a long time after that – you pay much more interest than principal.

Just as an example, on our £80K ($126K) loan during the first year we made 12 payments of £956 ($1,507) and in December the loan had been reduced by £3,950 ($6,225) – the rest went on paying interest. To pay off debt fast one should race with all they have to reach fast the tipping point when they start paying more principal than interest – once there, the repayment stops being a Sisyphus task and the ‘stone rolls easily downhill’.

One of the best things we ever did was to set up our ‘so worth it’ fund early on.

To remind you of the rules, this is a sum of money (in our case £300/$473) that went into a separate account and was specifically designated for having fun; the condition is that this needs to be used completely every month. This fund kept us sane – having some fun in our lives made us focus more completely and calmly on the rest of what we had to do.

During the last three years, we went skiing and spent time in the sun (we used our apartment in Sofia as a base so we could get a good price); we had expensive haircuts and chased marathons. We felt happy and positive!

In this kind of mammoth task, a bit of luck is always welcome. In our case, it came as a substantial payment from MBNA (the Ombudsman judged in our favour) and a bit of backdated payment of child benefit (altogether about £13,000/$20,500).

We are debt-free:  final thoughts

…I don’t have to tell you that John and I feel ecstatic to be debt-free; I am not sure whether I have ever felt as proud of myself as I feel today. Because from now on we can start building wealth seriously, consistently and without the pressure of paying off debt.